Home » Uncategorized » End of Global Money Printing Cycle is Near 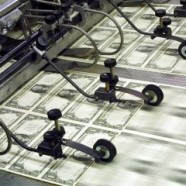 End of Global Money Printing Cycle is Near

Over the past year and a half, easing from the world’s central banks has spawned a great calm across financial markets. The Swiss National Bank’s policy of a cap in the Franc at 1.20 vs the Euro produced around 200bn in EUR purchases between April 2012 and July 2012.  In late 2012 the Federal Reserve embarked on its massive $85 billion per month asset purchases program. During April of 2013 the Bank of Japan started its own money printing scheme at 60tn-70tn JPY per year, which has come around to about $60bn per month.  Chinese FX reserves grew at $185bn in the first half of 2013, and then at a staggering pace of $323bn in the second half of 2013. An additional $129bn was tacked on in Q1 2014 as the PBoC devalued the Yuan. Trenders Game explains here why China stockpiling FX reserves is producing “QE style” effects on global bond and FX markets.  Of the few G10 central banks that hadn’t yet reached the zero lower bound in rates, the Reserve Bank of Australia cut interest rates several times in mid 2013. This all adds up an onslaught of rate cuts and money printing at around the pace of $175bn per month since early 2013. The only net tightening came from Eurozone bank repaying LTRO loans from the ECB’s 2011 3 year unlimited secured lending operation. 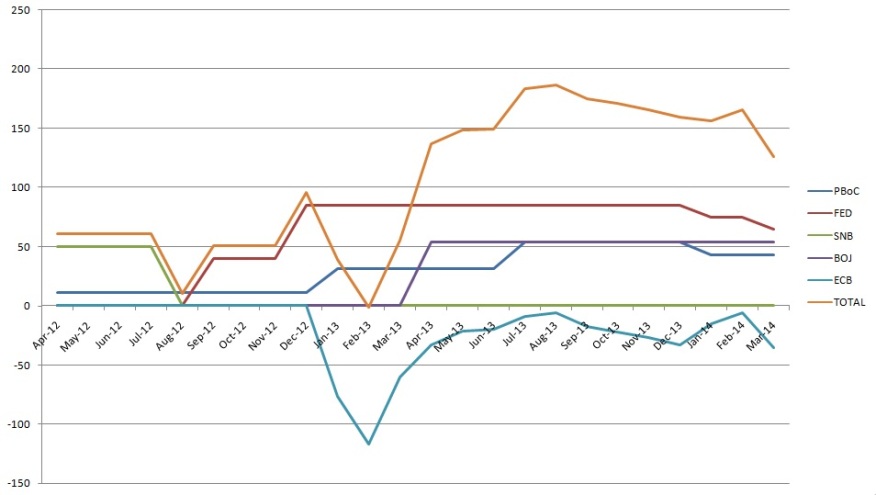 Judging by the graph, 2013 was the peak in global easing. This fact has been masked as of late because as the Fed has tapered asset purchases, the ECB has provided relief by moving closer towards easing and the Peoples Bank of China has also taken up some of the slack with a burst of money printing to devalue the Yuan. Central banks are in danger of creating a “V Shaped” turn in easing. At the moment we are at the turn of the easing cycle, the Fed is about to start seriously discussing how rates will increase. The PBoC is now seeing the USDCNY trading ominously close to its upper band, the closer the exchange rate gets to the 2%daily limit the more cautious they will have to be about what is now an obvious strategy of Yuan devaluation. The Bank of England is moving towards rate hikes in Q1 of 2015.  Emerging markets, while very small on a relative basis have also hiked interest rates in Q1 of this year. Turkey, India, Indonesia and South Africa all moved to hike rates during the January EM selloff. New Zealand began a cycle of rate hikes just two months ago.

It is important to imagine market conditions 6 months from now. The Bank of England and Federal Reserve will be moving towards their first rate hikes in nine years. The Bank of Japan will likely be closer to tapering its asset purchases than expanding them. The European Central Bank may see its efforts to stoke inflation start to pay off, and will be marginally leaning towards mild net tightening. Due the mechanics of a wider trading band for USDCNY, the Chinese government is likely to have seen the organic growth rate of their FX reserves peak last year. Without the massive stockpiling of Dollars, China’s purchases of developed market bonds will slow markedly. All of these conditions combine to create the picture of a massive globally coordinated shot of stimulus that occurred in 2013, with a subtle shift starting in 2014 and outright tightening lined up across almost all major central banks in 2015.

In command of the largest single monetary policy jurisdiction in the world, Mario Draghi now holds in his hands the balance of global easing. If he delivers clues towards a quantitative easing program this week, that will have the power to continue the party of low developed market interest rates, falling volatility across bond and stock markets and all time highs for the SPX, FTSE and DAX. If Draghi does not let on that QE is coming, the two year period of relatively low volatility may be coming to a close. Due to the pressure building on the ECB, This thursday has the potential for massive volatility and change in risk sentiment in my opinion.

The era of zero percent overnight rates in the USA and UK is coming to a close and it is nearly impossible to underestimate what the outcome of this will be. The valuation of nearly every asset in the world is based around the current risk free interest rate. If you were once again able to get 1-2% return on overnight cash, there are suddenly entire swathes of massively overvalued assets: government bonds that pay 2.4% interest, real estate that yields 5% unlevered, fortune 500 stocks that have a dividend yield of 2% or being long EM currencies that yield 1%-3%. These are all questionable investments if you can put your money in the bank or T-Bills and earn 2% completely free of risk. A huge repricing of all assets will occur as a flood of money moves to park at overnight rates using Fed reverse repos for easy risk free return. This effect will be magnified as traders must begin to pay significant interest on borrowed cash that’s used to lever up on speculative trades.

The turn in the easing cycle is near and there will be a host of ways to trade this. I will personally be watching high yield US credit, you can follow that with the exchange traded fund symbol JNK. In currency land I will be focused on countries that are very vulnerable to less global easing, South Africa and Turkey. In equities I think that downside will continue in overvalued internet and social media firms, as well as REITs that own single family homes for rent such as Silver Bay(SBY). The simplest bet may be call spreads on the VIX.  This shift in global policy will be one of the greatest trading opportunities of all time, and it makes sense for us all to keep our eyes open.