Posted by Chris on November 14, 2016 in Uncategorized | Leave a comment

US bond funds in the Bloomberg/Barclays benchmark index lost $18 billion in value this past week as Donald Trump prevailed in the 2016 Presidential election. Total global bond market losses have been $1 trillion as 10 year US Treasury yields rose an astounding 21 basis points on Wednesday alone. The move from 1.80% to 2.13% has translated to a 6.2% loss in the TLT long treasury bond ETF, the largest short term loss since the 2013 taper tantrum. Other Western developed markets followed the move as 10 year UK Gilts, German Bunds, French OATS, Italian BTPs and Spanish Bonos all felt Donald Trump’s collateral damage as markets begin to price in a massive new supply of government debt. 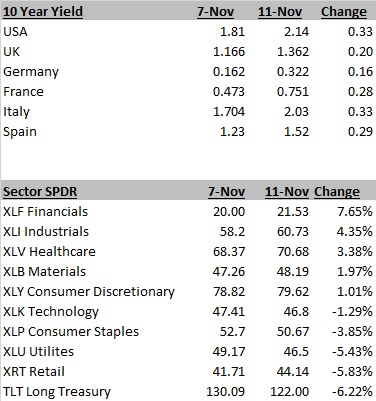 Corporate bond ETFs saw huge outflows with 2.46 billion pulled from the HYG Junk bond fund. Rates sensitive stocks went along for the ride as the utilities index XLU dropping 5.43% and consumer staples falling 3.85%. These sectors had been bought up heavily in the first half of the year as investors were desperate for income producing investments while long term government bond yields across the developed world hit all time lows. This trend reversed massively this week as Donald Trump will take over with control of congress and can immediately pursue his policies of large infrastructure projects, huge tax cuts and big military spending. Bloomberg is calling it the “Trump Tantrum” while the Financial Times has dubbed it “Trumpflation”. 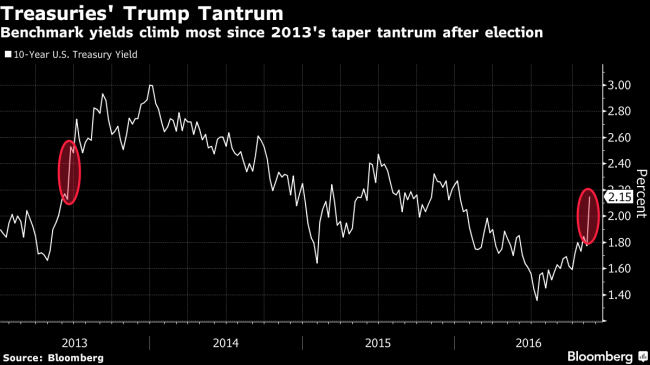 Even as the bond markets were closed on Friday for Veterans Day, the TLT long bond ETF fell half a percent as the Financial Times reported that President Elect Trump reiterated his promise for $1tn in infrastructure spending over 10 years with some financed by public debt. He has not yet commented on other promised spending, but the market interprets his policies as positive for growth. These fiscal policies could be extremely effective at a time when Janet Yellen has said she wants to run a “high pressure” economy.  The response from the Dollar and the yield curve echo this sentiment as both whipsawed massively off the election night lows as investors reconsidered Mr.Trump proposals and took a wait and see approach.

Markets are guessing that Trump will quickly move to implement the pro-growth initiatives he has proposed. The more risky promises he has made on tarrifs and trade are being ignored at the moment and will continue to be unless Mr.Trump mentions them again in the coming weeks. The months following Brexit have taught that in this situation markets are likely to cling to every additional detail and priority from the transition team and Trump himself. If they continue to talk up infrastructure projects, “big league” tax cuts and military spending the move in bond yields is just getting started.

← What Happened To The Volatility?