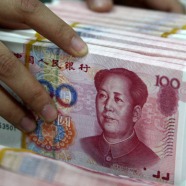 Falling Yuan is a Global Threat

Posted by Chris on April 2, 2014 in Uncategorized | Leave a comment

The Chinese currency has been weakening for just over a month now, but this move will have far reaching effects on currency markets and global inflation trends. It is widely accepted that China unfairly manipulates it’s currency to gain an unfair advantage over it’s trading partners. This manipulation is carried out by the People’s Bank of China (PBoC) setting a daily fix for its exchange rate. This fix is the rate at which currency transactions are executed on that day. Over the past few years China has increasingly allowed for wider fluctuation in its currency.

The PBoC intends to slowly let the market have more of a say in its currency, so as to gain more trust from global financial markets and to appease demands of the West that the Yuan be allowed to rise. There is a huge advantage China gains by keeping its currency artificially low. Their goods remain cheap and the Chinese export sector booms. The Chinese government takes in US Dollars and hands out the set number of Yuan to the local Chinese exporters. No matter how much flow goes through the currency market, the exchange rate never moves more than they want it to. This causes the Chinese government to take in huge amounts of US dollars, that are then invested into US treasuries. A portion of the US dollars are sold in exchange for other currencies so as to maintain a balanced basket of currencies that is around 60-70% US dollars.  The net effect of this is a weaker dollar but lower US treasury interest rates.

As China moved to tighten liquidity and clean up dubious lending practices in 2012, the PBoC let local interest rates rise. This occurred at the same time the Bank of Japan and the Federal Reserve embarked on their open ended quantitative easing programs that were together injecting over $120bn per month into the global economy. It is now becoming clear that some of this money ended up in China, chasing those higher interest rats.

In late 2012 the effective prevailing rate that the Yuan traded at moved away from the fix and rose to the top of the allowed ‘band’ enforced by the PBoC (see chart). The band was 1% at the time, and was recently widened again to 2%. This signifies that there are more buyers than sellers, so price rises. As the PBoC enforces the 1% ceiling for moves on an intraday basis, they have to print Yuan once the currency bumps against the ceiling to prevent any further increase in the Yuan’s value on that day. As more Yuan buyers emerge, the PBoC absorbs the US Dollars and creates new Yuan out of thin air to give to the local business that have exported goods.

At some point the local businesses realized they could simply lie on their invoices, telling the government they exported $100mm in goods, when it may have in fact only been 20mm. That excess $80mm is borrowed hot money sneaked into the domestic economy. US Dollars could be borrowed offshore at near 0% rates and brought into China using clandestine methods and invested in Chinese property, trusts and others high yielding investments that paid well upwards of 10%. Huge swaths of Chinese companies began doing this, and the PBoC ended up taking down $500bn in excess reserves in 2013 to finish the year with a total of $3.8t. The increase was only $130bn in 2012.

These companies felt comfortable taking this lucrative trade because the Chinese government was on a campaign to let the Yuan rise, but very slowly. The government set the fix rate higher by a very tiny amount, every day for nearly 18 months straight. There was no way this trade could lose money as long as the government proceeded with this policy.

Since late February 2014 the PBoC has intervened to flush out these highly leveraged unsophisticated carry traders. USDCNY has since rocketed from the lower end of the allowed trading range at 6.04 to around 6.21, causing massive losses for Chinese companies. This move of nearly 3% sends a global ripple of cheaper prices, giving the world a near instant 3% discount on Chinese exports. As the ECB is under pressure to fight deflation, the Chinese currency selloff is surely a point of focus as deflationary pressures will increase as these lower costs for Chinese goods feed through into the European economy.

Implications for the EUR and GBP are also very significant as the diversification of incoming USD reserves will now be a less and less important driver of EURUSD and GBPUSD price action.  Since the Yuan is no longer trading at the top end of its allowed range, there is no need for the PBoC to print excess Yuan and  take in US Dollars. This phenomenon is also unlikely to occur again any time soon as the band was widened to 2% from 1% on March 15th 2014. As China’s economy weakens the actual concern may be USDCNY traveling to the other side of the band, where the PBoC may be forced to sell US dollars to prop up its own currency.  This very unsettling scenario would see selling of developed market bonds as the PBoC has to cash out of its war chest to support its own FX rate. If there ever was a signal the bond bubble was nearing its end, it would be China selling. This situation would also experience a reversal of the diversification flows, as a drawdown in US Dollars would need to be rebalanced by selling EUR and GBP to maintain the 70% USD basket.

Now that the Yuan has more freedom to move on its own Keep USDCNY on your radar, and watch for it nearing the respective intraday trading boundaries.