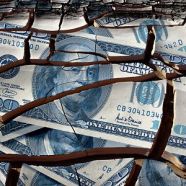 Posted by Chris on April 10, 2014 in Uncategorized | Leave a comment

The USD is now in its fifth day of declines. Last week’s non-farm payrolls and recent Bank of Japan meeting sparked a wave of Dollar selling. Looking into the recent CFTC positioning report, the vast majority of USD longs were held against the Yen. Earlier this week these positions were put under massive pressure as the Bank of Japan’s press conference divulged no new clues for new easing. The bank seems content to continue printing $580bn-$680bn per year while core inflation has risen to 1.3%. The Bank of Japan’s target is to reach 2%, they are 1 year into the 2 year timeframe to achieve this goal. In the last 6 months or so, USDJPY has been the sole vehicle to express a bullish view on the US economy. The words out of the Bank of Japan this week are forcing Dollar bulls to find a new currency to bet against.

At the current moment, looking across the G10 I see no US Dollar pairs where the non Dollar side is weakening. The round of Dollar strength witnessed in January of this year was mainly seen versus JPY, CAD, AUD and Emerging markets currencies. Most of these bets have since dried up. The Bank of Japan this week flushed out JPY shorts. Positive CAD data has taken away most reasoning for the Bank of Canada to be dovish, especially a drastic turn higher in prices due to the recent CAD weakness. The Reserve Bank of Australia explicitly shifted it’s stance from dovish to neutral by proclaiming we are now in a “period of stability” for interest rates. Q1 Australian data has been good, as home prices rise at a record pace and the unemployment rate drops. Emerging markets currencies have turned higher as investors sniff out bargains, and South Africa, Turkey and India all hiked interest rates In Q1.

In Europe the ECB’s futile attempts to talk down the Euro show that the bank may be slowly losing credibility. Sterling remains bid as the markets see the Bank of England as one the most hawkish G10 central banks. The Swiss Franc is supported by last month’s higher than expected inflation print, but in the larger picture will follow the Euro’s path due to the EURCHF floor at 1.20.

All of these factors in the context of a US economy doing well (200k jobs per month), but not well enough to significantly advance the timeline for rate hikes is encouraging market players to put on USD funded carry trades. Until a G10 central bank makes a dovish move, it remains difficult to express bullish dollar conviction because the targets to bet against don’t seem ready to weaken.