Much More Room to Sell Euro

Posted by Chris on March 2, 2015 in Uncategorized | Leave a comment

Euro shorts remain close to near the all time highs seen in 2012 when Greece teetered on the edge of exiting the Eurozone.  I have noted in the past couple of weeks that unprecedented degrees of monetary policy divergence call for unprecedented amounts of short positioning in this pair, and we have probably not reached what will ultimately become a much higher high for EUR shorts in the months to come as the ECB starts buying bonds and the Federal Reserve hikes interest rates.

Additionally, the notable decreases in JPY shorts need to take up their positions elsewhere, which will likely be via selling the Euro. As the Bank of Japan becomes more apprehensive about more easing, USD bulls will switch over to selling the Euro to keep their size of USD longs constant.

As EURUSD broke out of its recent range last week, Barclay’s positioning indicator showed that leveraged and real money players were coming back into the market to sell the break of a month long range that had developed. 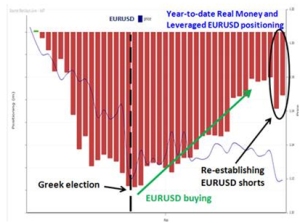 Ultimately, the argument about whether current positioning is “too big” is a tough one for me to buy into just given how big the differences in bond yields have become just over the last couple of weeks. The spike higher in US yields over the last few weeks has not see Eurozone core or periphery yields follow (or Japanese yields). These bond markets where QE is underway are essentially “locked in” at high valuations (low yields) due to the presence of  central bank buying.  If US yields continue to move away from Eurozone yields, the case for selling EURUSD will become even stronger.

Take a look at the current levels in the 10 year and 2 year bond markets in the charts presented here. Remember that the closer the tenor of a bond is to overnight bills the more the central bank policy rate affects the yield.  Two year German bonds are yielding -0.22%, while 2 year US yields are at 0.64% and rising. This is a ridiculously large divergence, which will continue to widen since the market is STILL under pricing the chances of multiple Fed hikes this year. I am using German yields as representative of the ‘core'(Germany, France, Netherlands Etc.). In this example I use Italy as representative of the periphery (Italy, Spain, Portugal,Ireland).

On the longer end of the yield curve prices are more about supply and demand, and this is where things get very interesting. The ECB is now in the market to buy billions in bonds in a market where there is very limited supply. The WSJ ran a story last week that showed just how big of a player the ECB will be given the fact that widespread austerity measures have drastically decreased the net yearly supply of sovereign debt.  A cited example is that Germany will only have net issuance of 15bn EUR in debt this year, while over the period of the QE program the ECB will be on the bid for 215bn EUR worth of German bunds.

With the ECB bullying the market, at the same time China is now meaningfully drawing down its FX reserves for the first time since its US Dollar peg started in 1994. I will be writing another post on this monumental development, but  obviously now that China and the Oil exporting nations have become next sellers of Dollar denominated fixed income higher US yields will likely continue. Meanwhile the ECB and BOJ will have their respective yields locked in at the lows due to their massive purchases underway. There are reasons for US yields to rise at the short and long end of the curve as the Fed hikes overnight rate and China/OPEC nations sell down FX reserves to stabilize their currencies in the face of a rising Dollar which is being driven by Fed hikes therein creating a circular positive feedback loop of higher bond yields and US Dollar.

← Market Rangers 2 Can FOMC Be Patient on “Patience”? →