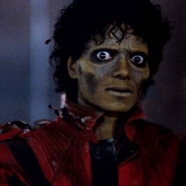 Yield Seeking Zombies Will Be Tested At Jackson Hole

Posted by Chris on August 22, 2014 in Uncategorized | Leave a comment

The theme of the last 6 months has been low volatility and carry trade investing. Global investors have become ‘yield seeking zombies’, lurching from one market to another seeking out higher returns relative to  their respective domestic markets. The trades of choice have been high yield US bonds, leveraged loans and emerging market corporate and sovereign debt. Money has moved into these trades, even as Janet Yellen calls their valuations ‘stretched‘. These rich valuations materialized after investors squeezed every bit of value out of the European periphery throughout the course of 2013 and early 2014. Markets have gotten so comfortable that volatility on all three major asset classes(FX, stocks, bonds) is at all time lows. 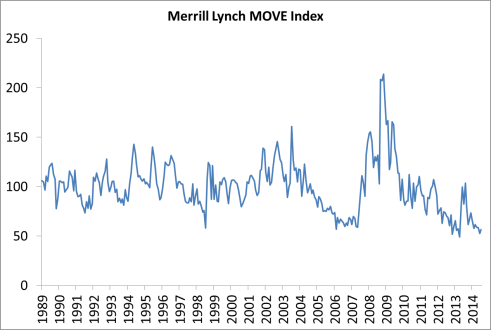 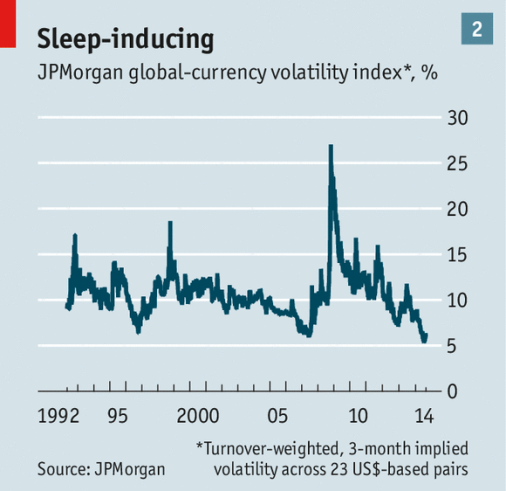 Carry trades have become even more crowded in the wake of the ECB’s June easing policies as investors seek to borrow Euros and buy higher yielding currencies. German 10 year yields flirt with 1.00%, while periphery yields have fallen to an impressive sounding ‘400 year low’. QE Is now clearly being priced into the Eurozone sovereign bond market. On the other side of the Atlantic Janet Yellen has captivated global investors with was has become known as a ‘dovish stare, an unmovable,  auto piloted dovish stance that completely ignores positive data. The chairwoman in fact has never been seen as making a decisively hawkish comment, ever.

Anyone that remembers Ben Bernanke’s May 2013 sudden shift to hawkishness can attest to what can occur when the markets suddenly is off sides on expecting a perma dove to remain dovish. Expectations for dovishness have increased marginally over recent weeks as the Chinese and Japanese economies have slowed notably, Mark Carney kicked BoE rate hikes a few months down the road, and European data has been bad enough to assume that QE is coming down the pike.

The bad news rally in carry trades and stocks has run a long way simply on the assumption that the (non-U.S.) data is so bad that there must be more stimulus coming. As markets gear up for speeches from Janet Yellen and Mario Draghi at Jackson Hole today, it is not a stretch to say that the yield seekers are by far at the most risk. Any hint of hawkishness from Yellen in combination with Draghi not delivering anything that implies QE is on the way could put carry trades overall in the line of fire.

There are massive deficiencies in market liquidity in most of these carry trade assets, mainly high yield bonds and emerging market corporate debt. If there is a stampede to the exit it will be extremely apparent that the market has come under stress and risk aversion has increased. Emerging market currencies are obviously the ones to watch, but NZD and AUD are especially exposed to a weakening property market in China and have been notable resilient as of late. There has been extensive talk about the impending Dollar rally, when in actuality there is no true Dollar rally until the Fed has surprised the market and short term interest rates experience extreme volatility as traders price in a new timeline for rate hikes and flush out carry trades.