Home » Uncategorized » Is ECB QE On The Way? 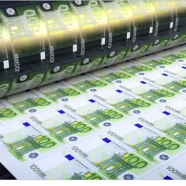 Is ECB QE On The Way?

Posted by Chris on August 26, 2014 in Uncategorized | Leave a comment

Taking Draghi’s comments from the August 7th press conference and comparing them to what was said during his August 22nd Jackson Hole address shows that the ECB President is concerned about the medium term inflation picture. The language about medium term expectations being firmly anchored below or close to 2% has been a part of the policy statement for a very long time, but in last few weeks the ECB’s chosen measure of inflation expectations fell very slightly below 2.00% from 2.2% three months ago. This means that Draghi is recognizing the possibility of inflation expectations becoming de anchored from their 2% goal. Below is first the excerpts from the ECB press conference, then Draghi’s impromptu comments at Jackson Hole:

” Inflation expectations for the euro area over the medium to long term continue to be firmly anchored in line with our aim of maintaining inflation rates below, but close to, 2%”

” , the Governing Council is unanimous in its commitment to also using unconventional instruments within its mandate, should it become necessary to further address risks of too prolonged a period of low inflation. We are strongly determined to safeguard the firm anchoring of inflation expectations over the medium to long term.”

” According to Eurostat’s flash estimate, euro area annual HICP inflation was 0.4% in July 2014, after 0.5% in June. This reflects primarily lower energy price inflation, while the other main components of the HICP remained broadly unchanged . On the basis of current information, annual HICP inflation is expected to remain at low levels over the coming months, before increasing gradually during 2015 and 2016. Meanwhile, inflation expectations for the euro area over the medium to long term continue to be firmly anchored in line with our aim of maintaining inflation rates below, but close to, 2%.”

DRAGHI: Well, it didn’t really come as a surprise because, as I told you a moment ago, this data is mostly due to the changes in the price of energy. And if we consider the HICP, excluding food and energy, we would have 0.8%, unchanged from the previous month. But having said that, there is no doubt that inflation is low and will remain low.

On a specific point that was raised by a usually accurate market observer, also if we look at five-year inflation expectations, derived from the break-even of the linkers, we would observe a 0.5% inflation expectation. This was a quite interesting point, but at least we think the calculations should be done differently. We should observe, not one issue, but the overall, the universe of issuances of linkers with that maturity. And this would show that the expectations over the five-year horizon are still anchored at 1%.

At Jackson Hole, August 22nd:
DRAGHI: Inflation has been on a downward path from around 2.5% in the summer of 2012 to 0.4% most recently. I comment on these movements about once a month in the press conference, and I have given several reasons for this downward path in inflation, saying it is because of food and energy price declines; because after mid-2012 it is mostly exchange rate appreciation that has impacted on price movements; more recently we have had the Russia-Ukraine geopolitical risks, which will also exert a negative impact on the euro area economy; and of course we had the relative price adjustment that had to happen in the stressed countries as well as high unemployment. I have said in principle most of these effects should in the end wash out because most of them are temporary in nature — though not all of them.

But I also said if this period of low inflation were to last for a prolonged period of time, the risk to price stability would increase. Inflation expectations exhibited significant declines at all horizons. The 5year/5year swap rate declined by 15 basis points to just below 2% — this is the metric that we usually use for defining medium term inflation. But if we go to shorter- and medium-term horizons, the revisions have been even more significant. The real rates on the short and medium term have gone up, on the long term they haven’t gone up because we are witnessing a decline in long-term nominal rates, not only in the euro area but everywhere really. The Governing Council will acknowledge these developments and within its mandate will use all the available instruments needed to ensure price stability over the medium term.

Analysis:
Taking all of these comments into account, it is important to keep Draghi’s goal in mind. He wants to push the Euro lower, and jawboning is a part of his toolkit. In the past, when a big signature policy change is coming Draghi has been pretty clear about it. The last two big policy programs were preceded with very clear declarations of “whatever it takes” and ” we are comfortable acting next time”. During the Jackson Hole commentary, Draghi pointed out the shift in inflation expectations and followed up with the standard language from the current policy about “using all available instruments within the mandate”. It is my view that this didn’t represent a clear and obvious jump to quantitative easing being imminent

While inflation expectations have been declining over the last month, the price of oil has fallen nearly 10% in only three weeks which is surely impacting inflation globally. Also, for nearly four months now Eurozone core inflation has been steady around 0.8%-1.0%. In the Jackson Hole comments Draghi offered up the caveat that energy prices have affected inflation significantly, albeit he still seemed to focus on the decline of inflation expectations regardless of the reasons.

Going forward, traders can take two views here. One that QE is on the way, JP Morgan analysts give it a 50% chance by December and Citi has it penciled in for December as well. Sell the EUR and buy stocks, this is what has obviously already been happening since the Eurozone GDP figures were released.

The contrarian view point is that falling inflation expectations over the last month have been driven by a huge decline in the price of energy. It would seem hasty for the ECB to jump to print billions of Euros when the entirety of the world was just handed a nice bump in real wages due to cheaper oil. Yes the decline in oil is weighing on inflation expectations, but this type of decline in inflation isn’t really a bad thing at all. It would be prudent for the ECB to just wait to see how its June policy measures progress, barring a continued fall in inflation expectations. The EUR has already declined off the yearly highs, and it is worth seeing how this will affect CPI, especially given that the year over year comps in the exchange rate will become more favorable in the coming months. EUR positioning is extremely short, and any good news or rebound in CPI would push back calls for QE from the ECB. If sentiment on ECB QE sours expect some upheaval across all markets globally, as this idea has been pushing everything from bonds, stocks to currencies over the last few weeks.