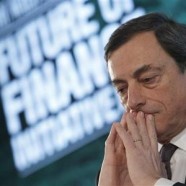 Posted by Chris on September 18, 2014 in Uncategorized | Leave a comment

A wrench was thrown into Mario Draghi’s plan to boost inflation and bolster the Eurozone’s economic recovery today as only 82.6bnEUR was taken up in the first of eight offerings in the so called “TLTRO” plan. The funds are restricted to only be used to lend to small and medium sized businesses, so the demand is somewhat a measurement of business credit conditions. The Euro has traded a bit higher today as the current overall picture for easing doesn’t look as promising as Draghi has let on in his last few press conferences.

The ECB is limited in several ways with its current policy. Rates are now at the lower bound, with Draghi saying the deposit rate will not be cut below its current level of -0.20%. More importantly the ‘QE-Lite’ program announced earlier this month faces significant supply and operational challenges.  The central bank has promised to buy covered bonds and asset backed securities in an attempt to boost it’s balance sheet. Supply in both of these markets is very small relative to the size the ECB would need to purchase to make a significant impact.

Eurozone banks don’t need more cheap money, that is satisfied by the ECB’s ongoing unlimited refinancing operation  which offers short term loans in exchange for collateral. 300bn EUR in ABS collateral is already pledged to the ECB on a rolling basis. The main issue here is Eurozone banks do not have enough capital to make loans to small businesses. This capital shortfall will likely become much more apparent over the following months as the ECB releases the results of it’s asset quality review, a full fledged check up and stress test on Eurozone banks. Unfortunately, buying covered bonds and asset backed securities as the ECB plans, will not help the banks from a capital standpoint because the assets the ECB plans to purchase are already very safe.

Covered bonds are backed by underlying loans such as bundles of mortgages or business loans. The bonds are termed ‘covered’ because the creditor has recourse against both the collateral and the issuing financial institution; they are seen as very safe assets. Since these assets are deemed very safe, they do not require banks to set aside very much capital to own them. Covered bond issuance year to date stands at $118.8bn (Sep 10th).

Asset backed securities are bundles of business and consumer loans, split into risk pools. Senior debt is the safest pool but pays the lowest interest rate. Mezzanine is below senior, and the lowest equity pool is the riskiest. Regulatory rules require banks to retain some portion of the equity.  EUR114.3bn was issued in the first half of 2014, with 70% of that being retained by banks to use as collateral. So there is effectively only 34.3bn sold into the open market for the ECB to even purchase, an even smaller portion of this is senior debt that the ECB is allowed to purchase. 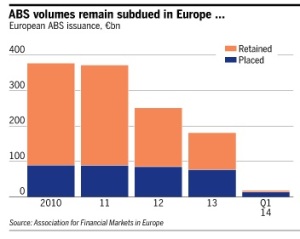 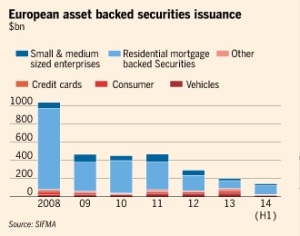 The ECB is currently only offering to buy covered bonds and senior ABS debt. Not only do these assets exist in small quantities, there is already huge demand for them because they are considered safe. These assets also require low levels of capital to be set aside because they are not risky. Bundesbank President Jens Weidmenn said that bending the rules to allow the ECB to buy lower quality debt is not an option. Weidmann has also discouraged Eurozone governments from offering to guarantee any ABS debt, in the fashion that the Fannie Mae and Freddie Mac do.

Mario Draghi is facing challenges to easing on all fronts. Banks seem unwilling to use the TLTRO loans because they probably doubt they can actually lend the money out on the scale required. There aren’t enough covered bonds and high quality ABS out there to buy. Lastly regulatory restrictions prevent the ECB from buying riskier private debt, and that doesn’t seem like something Weidmann will allow to change. Draghi’s intention is to expand the balance sheet by 1tn Euros. He will likely continue to try, but as weeks pass pressure could start to fade. The EUR has already seen a significant decline over the last 4 months, and this will probably start to show up in the inflation stats this month. If inflation has bottomed out, then Draghi may have to make due with a much smaller scale easing program or even think about raising deposit rates back to 0%.

← Is ECB QE On The Way? Awaiting the Dollar Correction →