US  Data Points to Spring Bounce

Posted by Chris on April 16, 2014 in Uncategorized | Leave a comment

Last week I wrote that a clear change in sentiment on the Dollar would be needed for USD bulls to take control. The recent string of data may be just what was needed to lend the greenback some support. U.S. economic data reported over the past few days has been unambiguously positive.  Producer prices, Consumer Prices, Consumer Sentiment and retail sales have all come out higher than expected.  The economy had been expected to bounce back when temperatures warmed up,  but the jump in prices is seen as more of a surprise. The USD story has been supported for months by moderately strong economic growth, but a rumbling of rising prices may be just what is needed to get the Dollar rally underway.

March’s headline number(includes autos) spiked to 1.1%, the highest level seen in nearly 18 months. This was supported by a very strong snapback of 9.8% growth in auto sales over last month. The less volatile and more reliable core retail sales number was 0.7% vs 0.5% expected. After the number many analysts have upgraded their estimates on Q1 GDP, with Morgan Stanley raising it’s number from 1.1% to 1.2%. 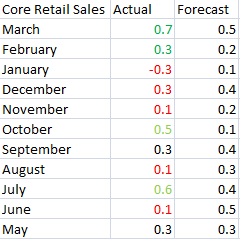 Producer Prices measure changes in prices businesses receiver for their goods and services.  Last month’s number came in at a whopping 0.6%(month over month) excluding volatile food and energy. The expectation was for 0.2%.  The annual increase was 1.4% in March, the biggest year over year increase since August. The important services category was up by 0.7%, the largest one month increase in four years.

Core consumer prices rose by 1.7% in March, above the expected level of 1.6%.  Core CPI is inching closer to the Fed’s goal of 2%, although the Federal Reserve uses a different measure of inflation (PCE)  to formulate policy . Seen in the the Chart below in the red line, Core CPI has remained resilient over the past few months.

While prices are not necessarily breaking out higher, I am very encouraged to see that prices are still rising in the wake of Fed Tapering and China devaluing the Yuan. Rising prices have the potential to create urgency for Fed to tighten, much moreso than a strong labor market. The Fed would be much less likely to simply let the economy cruise with ultra accommodative policy if there were obvious signs that inflation may be picking up.