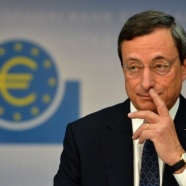 Posted by Chris on May 8, 2014 in Uncategorized | Leave a comment

The Euro was volatile during the early New York session today as Draghi spoke at the European Central Bank’s monthly press conference. The Euro looked firm throughout most of the European session as it rallied off the lows near 1.3900 and was aided by the lack of a rate cut at 7:45am EST. By the time 8:30am EST came the Euro traded at around 1.3950. Draghi began the press conference with no major adjustments to the policy statement and markets took this as their que to begin bidding up the Euro towards 1.4000. A high of 1.3994 was seen before price backed off slightly. A few questions into the meeting Mr.Draghi said that the governing council was” comfortable acting next time” to aid what possibly is becoming a period of prolonged inflation. The Euro immediately declined from 1.3960 to 1.3895 and currently trades around 1.3870 as of 9:54am EST.

Going forward the ECB looks as if they are becoming annoyed with what are mostly external forces pushing up the Euro in what they referred to as a “cause of serious concern”. Markets already expected a chance of easing in June when new quarterly staff projections would be available, so some of this news was already anticipated. It was however unexpected for the ECB to basically pre commit to action. This could mean a range of things but Draghi attributed the Euro’s strength to several causes. There was a moment where Draghi described inflows into periphery assets being one aspect of Euro strength. In another instance he referred to policy from other central banks causing inflows into Europe. There are surely other less verifiable avenues as well, mainly Russian and Chinese buying of Euros for various reasons. The small caveat here is that the Governing Council wants to wait until the June projections are available to decide on action, but they are comfortable with action.

Looking across periphery bonds, yields are dropping somewhat as Spain and Italy 2 years approach 70bps, down 2-5 basis points. Draghi’s comments look to mostly be taking core yields down as German two years are also down 2 bps in a much bigger relative move, seeing yields now at 0.125%. ECB action in June is likely to come in the form of a 10-15bps cut in the cash rate, with a corresponding cut in the deposit rate which would place it in negative territory. The ECB also has the option of ending ongoing sterilization of the Securities Market Programme, effectively producing an $245bn instant QE. Elsewhere emerging markets and high yielding currencies are ripping higher as they anticipate a rotation from perfectly priced periphery assets back into higher yielding EM bonds and equities. The South African Rand(ZAR) and Turkish Lira (TRY) are performing particularly well.

Momentum based positioning is obviously offsides at the moment as the last CFTC report showed healthy sized longs in EUR and GBP. From a rates standpoint if USD short term yields can begin to reflect recent strength in economic data, we may face a situation where periphery 2 year yields are nearly the same as US yields. This should take EURUSD significantly lower. The ECB is set for June action, but remains to be seen how much of an effect this will have on the Euro and inflation. The next flash CPI is on June 3rd.