Posted by Chris on July 11, 2014 in Uncategorized | Leave a comment

On July 3rd Reserve Bank of Australia Chief Glenn Stevens made a noticeable change in tone during a speech at the Australian Conference of Economists. The governor said that his central bank has more ‘ammunition’ to make further rate cuts. He also said that investors are underestimating the chances of a material decline in the Aussie Dollar. This tone was echoed today during an in depth Stevens interview with The Australian:
Stevens On Policy Rate:

“Well we haven’t defined what the period of stability is and indeed, as my remarks from  last week should make clear, I think before too much significance gets attached to that  language we’ll probably think about shifting to something not quite so specific.” 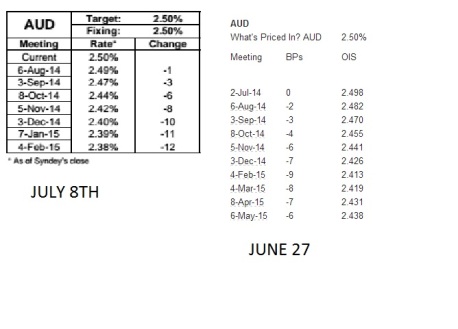 These new bits of language may be telegraphing a slightly more dovish tilt from the RBA, and rates futures have reacted accordingly and are now pricing in chances for a rate cut in late 2014. Governor Stevens seems to have made a clear shift in sentiment following the July 2nd massive miss in trade balance. Exports were far below estimates as sharply declining iron ore prices  finally made an impact on the numbers. Iron ore is Australia’s top export making up 21% of the 2013 total. Iron ore has declined around 35% this year with most losses coming in the last two months. One of Stevens’ concerns in today’s interview was that the Aussie dollar exchange no longer tracks the Australian trade balance, and given the recent decline in exports the Aussie dollar is too high.

“I’m not sure whether I’d be willing to say that we’re going to be (a safe haven currency) in a kind of a major ‘risk-off’ event.”

“(Explains that the Fed hiking rates will create ‘high market disruption) And that’s why we’ve said that our sense is that some of the investors are maybe  underestimating the probability of a material decline(in AUD) at some point, but I can’t say when that might be. ”

“One observes the terms of trade has been falling in the last six months, with not so much response from the exchange rate at least so far”

“Well our forecast as we were earlier saying is for things to on average be probably a little  below trend. Not a long way below, but a little below trend over the coming year. ”

“We’ve got a phase shift in a very large episode in the resource sector. Shifting from part two to part three, as the investment spin comes down, the shipments pick up and that’s happening very quickly.“

“It’s certainly true that in a number of the cities the price rises, the prices have tended to steady out for a few months, I think that’s welcome. Even in Sydney the pace of increases has abated somewhat,”

Stevens on the Fed:
“It’s been remarkably smooth. (Since taper tantrum)…  by the look of it, one would expect that that (Tapering) will be now accomplished fairly smoothly. I would only observe that that’s not the same as actually starting to raise the cost of overnight money.”

“Once it gets to be a few months away rather than twelve months or more away, perhaps that will be more of a test and I think one should not discount the possibility that there will be some disruption”

The RBA’s ‘period of stability'” on rates was adopted in the February statement. After five months of this policy, it appears that the RBA’s pressure points of a boom in housing prices and rising inflation are now less of a concern. Mining investment is expected to slow, or be slightly below trend as Governor Stevens mentioned. As iron ore prices fall while Australia is ramping up output, this is likely to discourage further investment in the sector. Overall a slowing in mining should even out the concerns of the 11% year over year gains in national home prices and inflation being right at the 3% target level.

In the coming months as the Fed moves towards exiting ultra easy policy, it will become more important to fully understand each central banks current bias. I will be looking to buy the Dollar and Sterling against currencies where the central bank has a dovish bias. After the last week, the RBA is firmly in this camp.