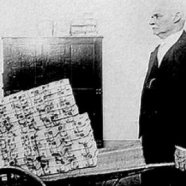 Posted by Chris on April 27, 2015 in Uncategorized | Leave a comment

The S&P 500 has risen 319% since the March 2009 lows. This bull market has been driven by a range of factors, but the easy explanation would be as follows: Liquidity in US credit markets was stabilized by the first quantitative easing program launched in 2008, which led to a broad rebound in the economy in early 2012. The parabolic leg of the rally started in late 2012 as the Fed and the Bank of Japan simultaneously undertook massive easing programs to the tune of $150bn in money creation per month. This unprecedented tag team of money printing saw stocks rally almost three years without a correction. The last 6 months or so we’ve witnessed huge stock buybacks drive shares and EPS higher, even though companies are not growing revenue their valuation multiples continue to expand.

Much has been made of the 17x P/E ratio of the S&P 500 which is on the historical high side of the range. It appears most of the multiple expansion this year is being driven by European Central Bank easing and corporate stock buybacks so CEOs can boost their bonuses. These forces have been counter balanced by a strong dollar cutting into corporate profits, along with growing signs of a slowdown in the US and China. The duel between these factors has kept equity markets relatively rangebound for nearly 6 months now. Making the bear case more confusing are the fact that the last mild sell off in October 2014 was driven by Federal Reserve rate hike fears and Ebola worries, both of which are now no longer much of a concern. The ECB has essentially backstopped any worries about the Fed hiking rates, and the FOMC seems cautious about its stance on rates anyway.

Its been four years now since I felt palatable fear in markets. In 2011 it was the combination of a slowing economy, the US credit downgrade, Italy default fears and the Fed seemingly delivering a death knell of “only” implementing operation twist instead of delivering another full blown QE program. This situation taught the lesson that markets fear a situation where the economy is sliding and the Fed does not take drastic action. The S&P 500 fell 21% from the peak to trough in 2011, no selloff since then has come close.

It may be the case that equity and credit markets simply cannot decline significantly as long as there is over 100 billion in asset purchases being undertaken each month by various central banks around the world. The current European Central Bank/Bank of Japan duo is buying about $131bn a month. Monthly money printing has been over $100 billion per month since late 2012. In the last 6 months the Fed handed off the baton of its duties to the European Central Bank. Japan is staring down an eternity of money creation as inflation pressures seem nowhere in sight. Confidence in quantitative easing is the only game left in the fiat currency system, absorbing bonds as China and the oil exporting countries sell bonds for the first time in decades.

The ability of central banks to print away problems and boost stock markets is relative. The idea that $131bn a month is currently ‘enough’ to satisfy us is always going to be in flux. If new problems emerge, like a Greek default or a faster drawdown in Chinese FX reserves, $131bn might not be enough anymore. Its hard to see how the world can over go back to a time when nobody is running a quantitative easing program. Sooner or later there aren’t going to be enough bonds to buy anymore with printed money.

My view is that there is no one particular bubble at the moment. The real threat to all asset classes is illiquidity, and QE masks this issue. The last 6 months have seen “flash crashes” in the treasury market on October 15th as well as the US Dollar on March 16th. The sell side is now laughably small compared to just how big the bond market has become since 2008, a topic that the WSJ mentioned in a recent article. Investment banks pulled out of commodities a couple of years ago, and are in the process of moving away from human traders on currencies desks. Interest rate swap teams have been massively scaled back as the product is very capital intensive. It seems fair to say that a simultaneous flash crash in multiple asset classes at once would be the next evolution of this trend. All in all, if central banks ever stop buying there is literally nobody left to sell to. 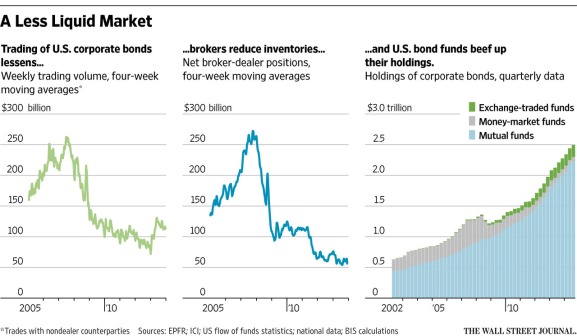