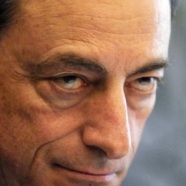 Central Banks Speed Towards The Wall

Posted by Chris on October 25, 2015 in Uncategorized | Leave a comment

The Euro plunged Thursday morning as Mario Draghi promised more monetary accommodation to come at the European Central Bank’s December meeting. Then on Friday we learned the People’s Bank of China cut interest rates as well as the reserve requirement ratio to boost their flagging economy and falling stock market. Global stock indices rose sharply in the wake of these events, but skepticism is on the rise as it becomes obvious that asset prices have now only risen more out of line with actual economic fundamentals.

The European Central Bank and Mario Draghi are now essentially forcing the Federal Reserve into action. If Janet Yellen’s excuse for not hiking in September was market volatility, what can she say now that central bank moves have unleashed a wave of panic buying in stocks and the VIX has fallen all the way back down to a 14 handle.

While Draghi and the PBoC did spark a massive rally in risky assets, what happens next is less clear than ever before. Speculation has already started on just how far into negative territory the ECB will cut its overnight deposit rate that currently stands at -0.10%, the lowest among rich world currencies. There is also the likelihood of extended or increased asset purchases beyond the 60bn EUR per month currently scheduled to end in September 2016.

The surprising thing about the ECB’s move is that it seems unnecessary relative to the possible risks. Just as QE3 from the Fed in late 2012, this round of easing is occurring during a period in which economic data is showing a sustained recovery and asset prices were already rising. Flash PMIs are flat but steadily in growth territory and banks are finally easing credit standards. Core inflation has been steady around 0.9%, and headline will begin to move away from 0% as the year over year oil declines roll out of the calculation in late 2015.There is no clear and obvious reason for expanding easing efforts other than the massive amount of table pounding from various investment banks saying the ECB should increase QE.

On the other side of the world the Chinese economy is supposedly growing at 6.9% but requires rate cuts every two months. This obviously makes no sense, and doubts have been widespread about the legitimacy of that GDP growth rate for some time. If the economy is doing fine why are so many rate cuts needed?

These policies always start as emergency measures, but grow into something much more threatening. Quantitative easing was needed to grease the global financial system in 2008 but quickly became a way for central bankers to boost asset prices. China’s USDCNY currency peg was intended to help boost exports in the 1990s but now has grown to be the center piece of the entire global manufacturing system. With the ECB and PBOC both easing last week we are now only another step closer to when easing becomes ineffective at continuing to boost asset valuations and expand earnings multiples for stocks.

Speculating on what may happen next is a fool’s errand, but I have a theory in mind. China has come under pressure over the last year as the USD has rallied and taken the CNY along for the ride. Draghi’s move could once again reignite the USD rally, piling pressure on China as CNY appreciation begins anew. Now that the PBoC is clearly in panic mode cutting rates every other month, the CNY will be hit with substantial selling flows especially if the FOMC moves to hike rates. China sold $94bn in FX reserves in August, and they will probably need to sell even more as the Fed begins to hike. There are alot of moving parts and cause and effect relationships unfolding in the current macro situation and I am not totally sure what products will have the clearest fundamental shifts.

You would think the US Dollar rally could continue much further, but who knows actually how many rate hikes the Fed will actually get off before risk sentiment deteriorates. This USD rally may push China to the breaking point, forcing the sale of more FX reserves that could finally see long term bond yields move away from 2% where they’ve been for almost 3 years now. Stocks remain caught in the middle, but I have a hunch that appetite to continue expanding valuation multiples will wane sharply as rates rise. Central banks are effectively speeding towards a wall in keeping policy insanely easy, pushing asset prices as high as they possibly can which may be setting us up for a significant decline.